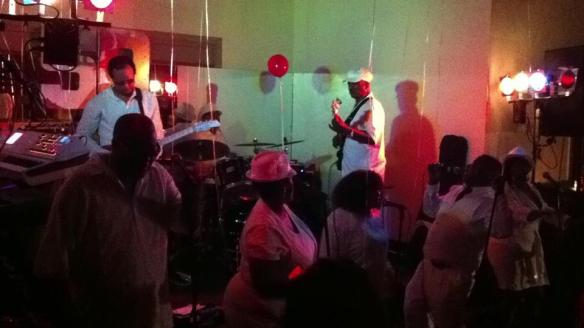 The Night it Turned Frosty

Its Lance Striplins birthday. A day that celebrated his first 50 years of life. This particular birthday took place in a small out of the way town called Oakland. It was a modest gathering of friends and acquaintances.

For the first three hours it was like any other party. The never ending train of arrivals. Greetings, handshakes, acquaintances catching up. People standing around talking with old friends, new friends, soon to be friends. Most parties seem to follow this pattern. It looked as if it was going to be a good party.

One of the guest/host was a gentleman by the name of Darrin Hodges. Darrin is no ordinary gentlemen. For he is one of the original members from a group called Gentlemen of Production, or simple “The Gents”. For those that don’t know “The Gents” were a Boogaloo group out of Oakland that reigned in the late 70’s early 80’s. They were the last of a long chain of groups that started in the late 60’s. Darrin is the type of person that feels you are only limited by the possibilities of your own imagination. What Darrin had in mind was no ordinary party. He had a plan. Darrin was going to call upon ghosts of the past, to bring out what has long been forgotten. Darrin wanted Lance to have one hell of party. So…………
Darrin brought Boogaloos with him, and only a few knew.

For the band members that did know? It was all about the talk. His friends chided him “Hey Darrin where are all these boogaloos you brought. I don’t see no boogaloo’s”? But Darrin was patient, for he had plan.

The night dragged on until the band started up. They sounded good for their first song, and most everyone cheered and clapped in appreciation. But that was not good enough, and Darrin new it. This was the opportunity that he waited for. When a band starts playing and no one is dancing? Darrin counted on this! His plan began unfold.

“So who here is up for a dance contest” Darrin says. No one moved.

When he called upon one of the two Boogaloos that he brought? The tension in the air shifted. Who is this person that is walking from the back of the hall? The hook was in. Darrin had everyone’s attention.

The music started, the dancer performed, and people were entertained. They applauded in appreciation. But was it enough? Well it got people dancing. But Darrin was hoping that others would bring their Boogaloo natures out. The night was young and it continued to drag on.

Doc arrived. Not a boogalooer, but one versed in the styles and moves from the late 70’s. More routines, more solos. More people dancing. Yes Doc and the other Boogaloo kept up the pressure hoping to stir what was once a common occurrence at an Oakland party.

As Doc and myself were off in the next room something happened. Darrin saw it. He called to us, beckoning for us to come and see. When Doc and I entered the room it happened fast. The Hit, the Turn, the Pointing finger. Yes, another Boogaloo had emerged, and he was headed right for me.

When Boogaloos battle they rarely take turns. Both dancers come straight on, dancing at the same time. It is not for the faint of heart. The best way to describe it? It’s like watching a gun fight with special effects, or two Sorcerers pulling out all the stops. It is rarely seen anymore, but when witnessed it is something to behold.

Darrin had this huge grin face. He had accomplished his task. Like a fisherman catching that big one Darrin left with the knowledge that there were still many others in Oakland that could still Boogaloo. The task was to find them. It was a night to remember with the hope of more to come.

But he left too early.

For although Darrin witnessed the one called Frosty reaching down deep and bringing out the spirit of Boogaloo past. Darrin missed the ones that followed. His missed the battle that ensued. The leans, the vibrations, the brim shaking, the posing, the robot motions. It was all there. But was it enough? YES!

When the elderly man (70’s) started boogalooing? It was a sight to see indeed. From one so elderly to bestow such a gift of spirit, all one could do was watch with amazement.

When the Midnight hour came it signaled the end, and perhaps a new beginning.

It was a joyous night. The Funk band was beyond fantastic. The Boogaloo ghosts of yesteryear materialized. Everyone came together to celebrate Lance Stiplins BDay Party. Yes it was a blessed night indeed.